While waiting for the autumn market to begin, we thought we would step back and look at the Bay Area from a variety of angles. If you are tired of reading about real estate, there are some interesting demographic analyses at the bottom of this report. 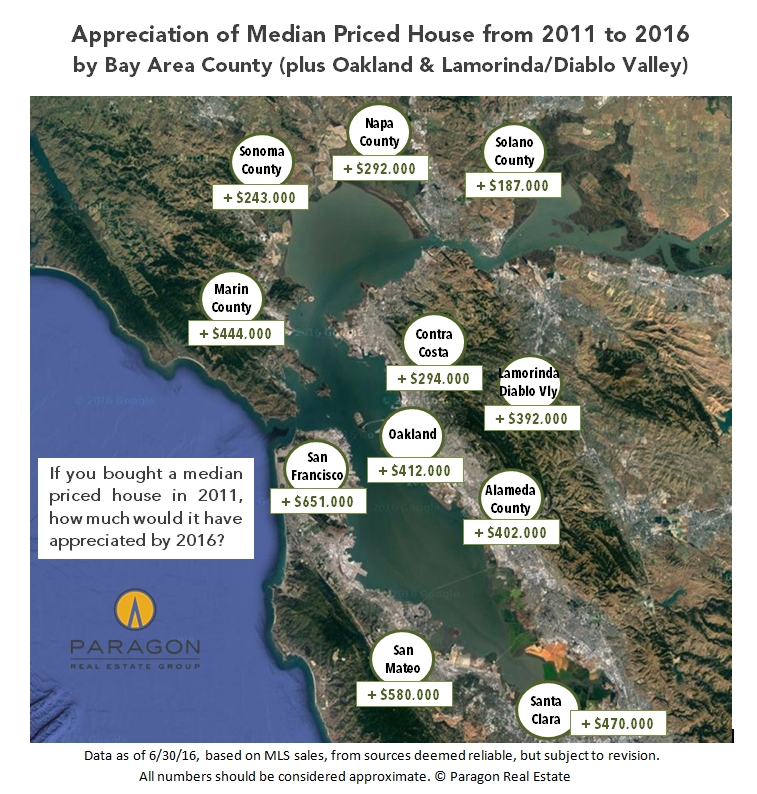 Ups & Downs in Bay Area Real Estate Markets
All Bay Area markets saw large surges in home values from 2000 to 2007; all went through significant or even terrible declines after the 2008 financial markets crash, typically hitting bottom in 2011; and all have made dramatic recoveries since. But there are big differences in how these events played out in distinct markets, with 4 main factors behind price changes over the past 16 years:

A fifth factor just beginning to impact some markets now (such as the SF condo market) is the significant increase in new home construction, most of which is on the more, or much more, expensive end. 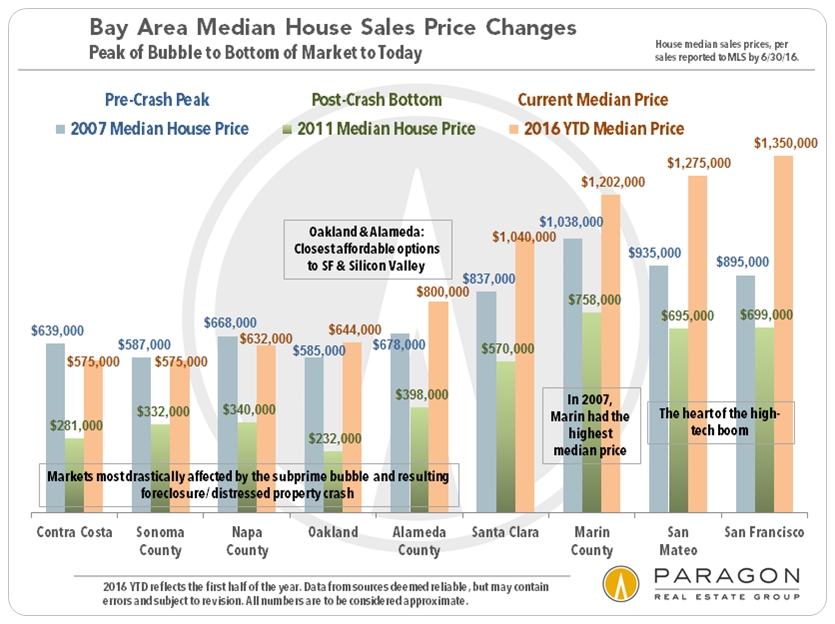 The chart above illustrates median sales price changes, from 2007, the approximate peak of the bubble, to 2011, the approximate bottom after the crash, to the present, after 4-plus years of recovery. The table below summarizes the percentage changes charted above. 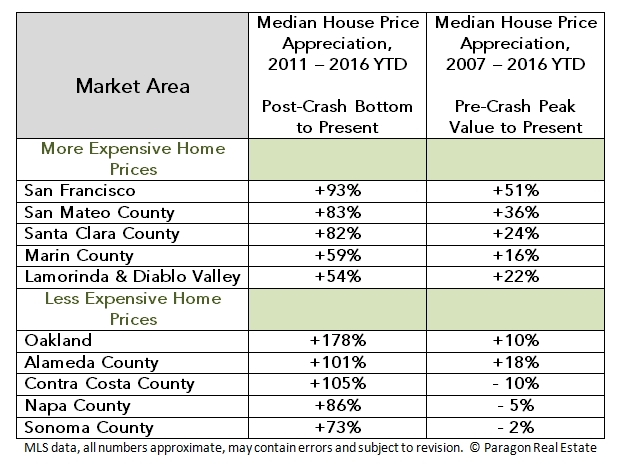 OAKLAND had a very large subprime bubble, a huge crash, and then a sensational recovery highly pressurized by being just across the bridge from SF (and much more affordable). The Oakland median house price is up a staggering 178% since 2011, partly because it crashed so low. However, because its subprime bubble was so big, it is only 10% above its inflated 2007 price. Alameda County as a whole has experienced much the same market. Other comparatively lower-priced Bay Area markets, such as northern Contra Costa, Solano, Napa and Sonoma, more distant from the high-tech boom, saw similar dynamics, but are still below their 2007 peaks despite substantial recoveries.

Price-change percentages up and down are not created equal: If a price drops 60%, it then has to go up 150% to get back to where it started.

SAN FRANCISCO, more expensive and affluent, had a much smaller bubble and much smaller crash with far fewer distressed property sales (and those mostly concentrated in its least expensive districts). The high-tech boom then supercharged its recovery: Its median house price is up 93% from the bottom hit in 2011 (much less than Oakland), but is 51% higher than its 2007 peak, the biggest increase over the 10 years of any of the markets measured. Silicon Valley has similar statistics, and other high-price markets like Marin and the Lamorinda/Diablo Valley area of Contra Costa County, saw comparable, if somewhat less dramatic, dynamics.

These county market descriptions are gross generalizations, as each county has both very affluent and less affluent communities, with their own unique dynamics.

Instead of looking at different locations in the Bay Area, Case-Shiller analyzes its entire market by low, mid and high-pricetiers, each tier equaling one third of sales. For any Bay Area home, whatever its price in January 2000, Case-Shiller assigns it a value of 100. All other values on the chart below refer to percentages above or below the January 2000 price, i.e. 150 equals 50% price appreciation since that date. Case-Shiller does not use median sales price data, but instead uses its own custom algorithm to reach its conclusions. 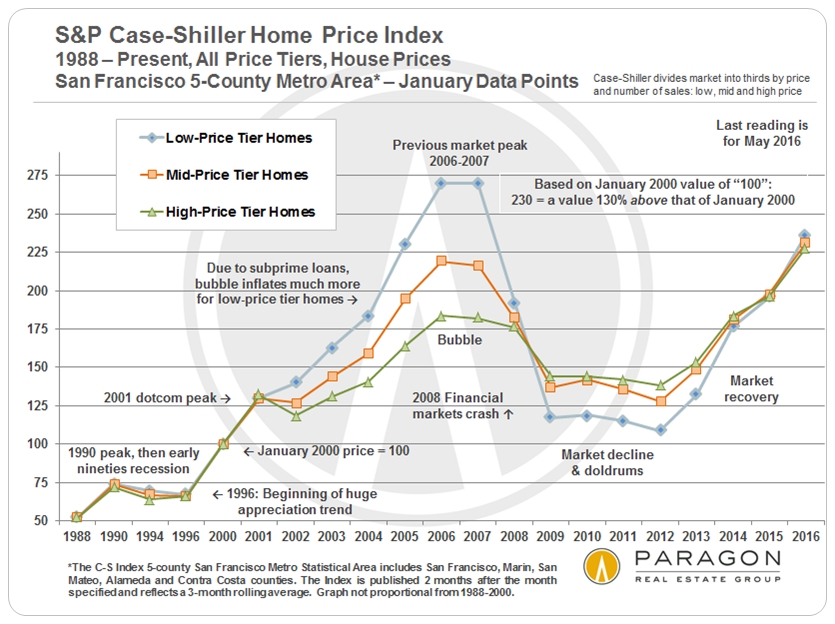 Two things stand out: As mentioned before, different price segments had bubbles, crashes and recoveries of vastly different magnitudes. Secondly, all the price tiers are now roughly the same percentage above their January 2000 prices, each showing about 130% appreciation over the past 16 years.

Note how much higher the peak of the bubble in 2006-2007 was for the low-price tier of homes (light blue line): Prices jumped an incredible 170% from 2000 vs. 119% for the mid-price tier and 84% for the high-price tier. Then came a correspondingly gigantic crash.

San Francisco Home Prices by Neighborhood, Property Type and Bedroom Count
Below is one of 7 tables in our updated breakdown of SF home prices. The full report:
SF Home Values Analysis by Neighborhood 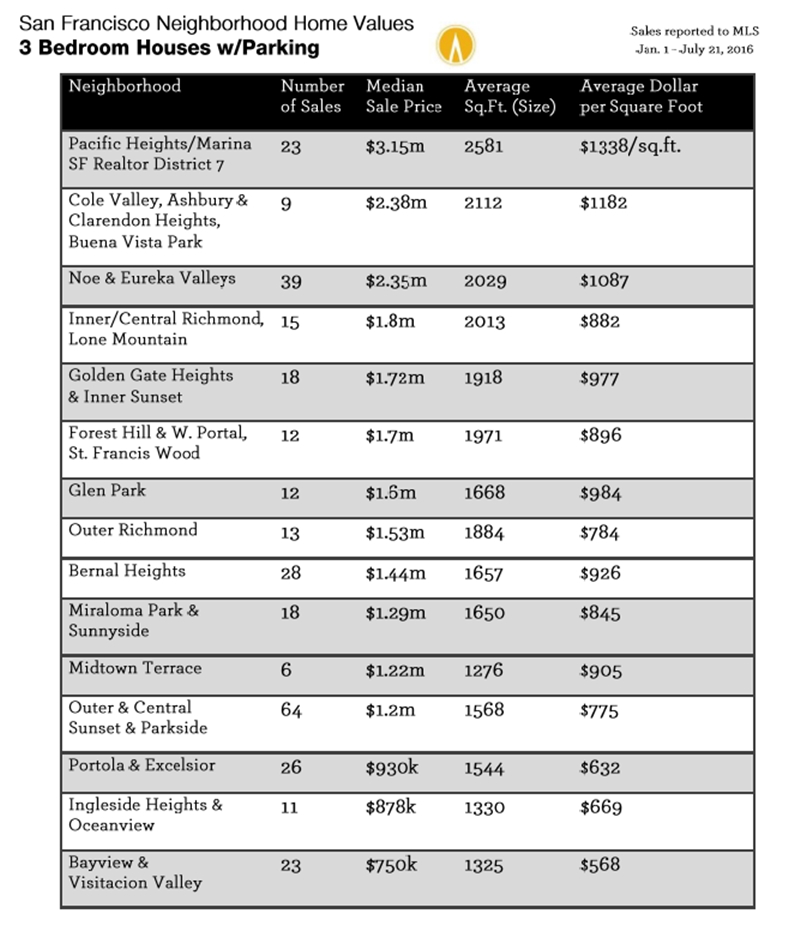 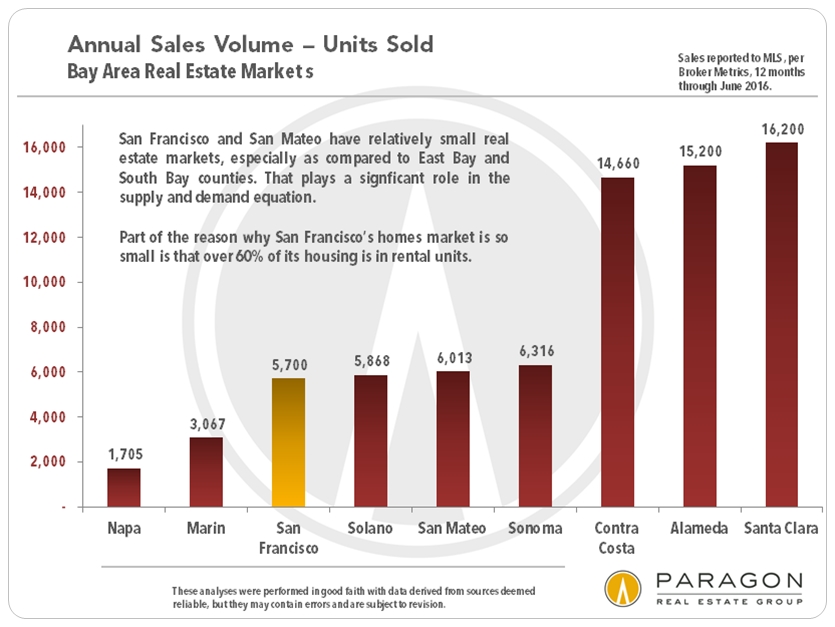 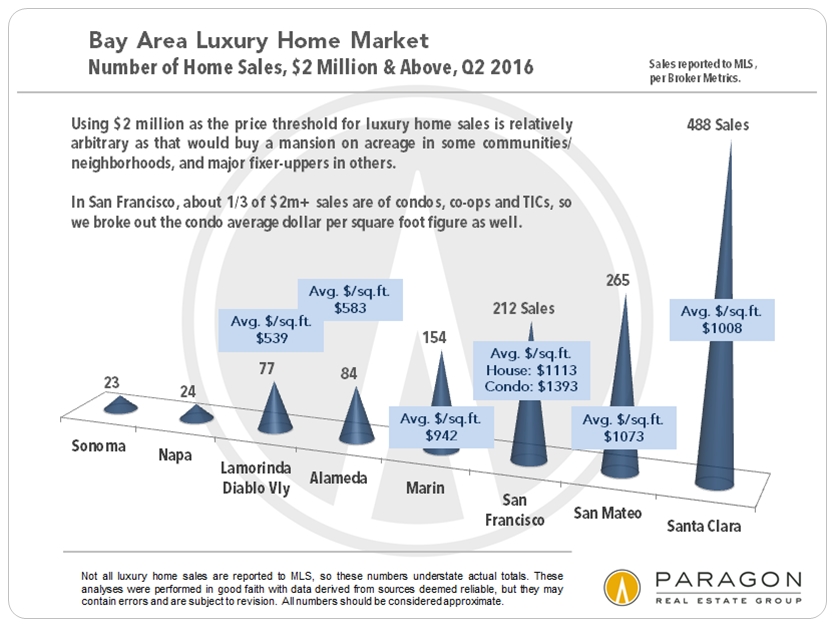 Virtually no place else in the country has seen competitive overbidding comparable to the inner core of the Bay Area. (Though some of it is caused by strategic underpricing.) 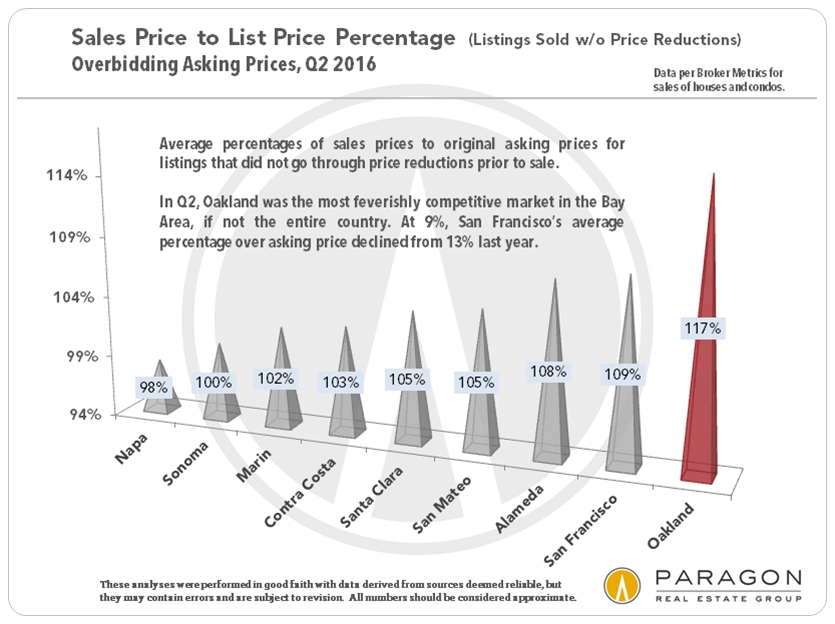 A few angles on how the Bay Area is different from other places, and how Bay Area counties differ from one another. 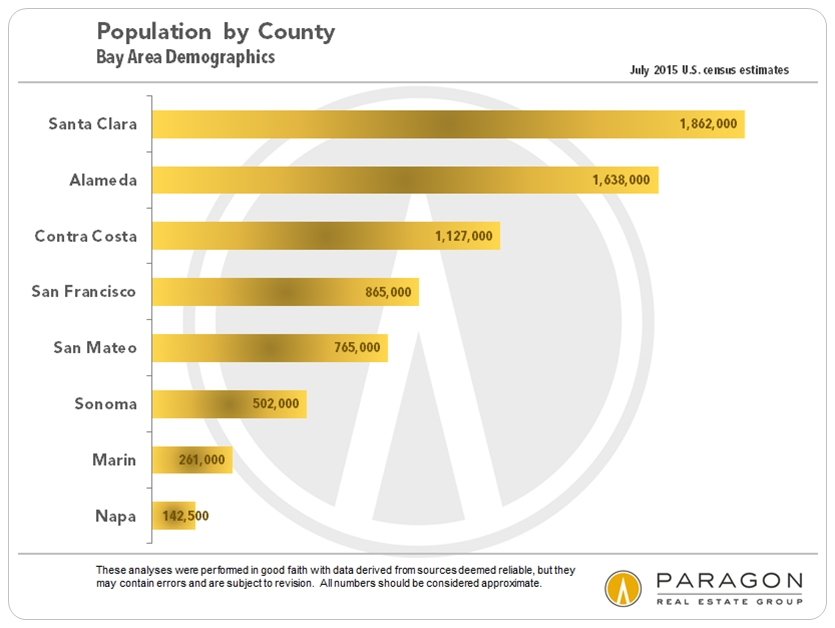 All Bay Area counties have been growing in population. San Francisco in particular is very densely populated and getting denser. 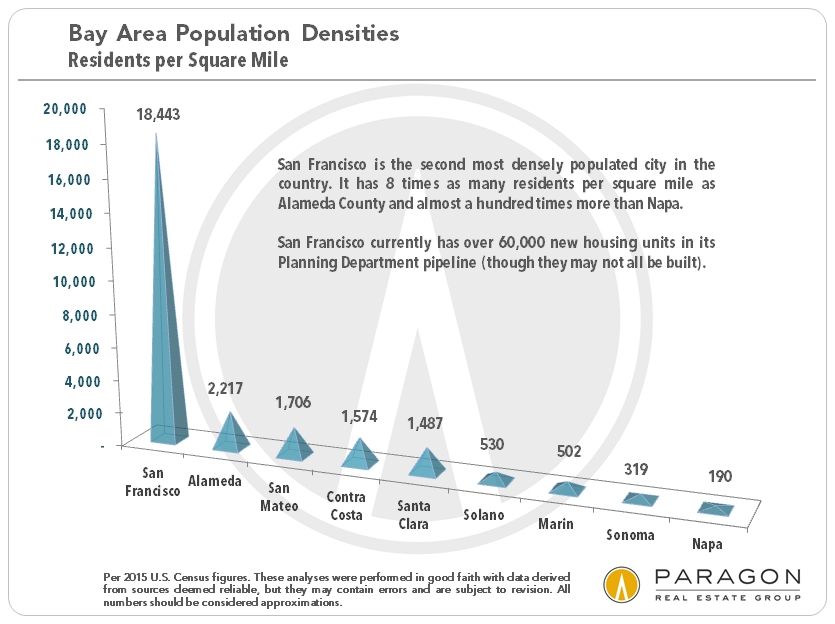 In the spirit of the times, a look at Bay Area political party demographics. 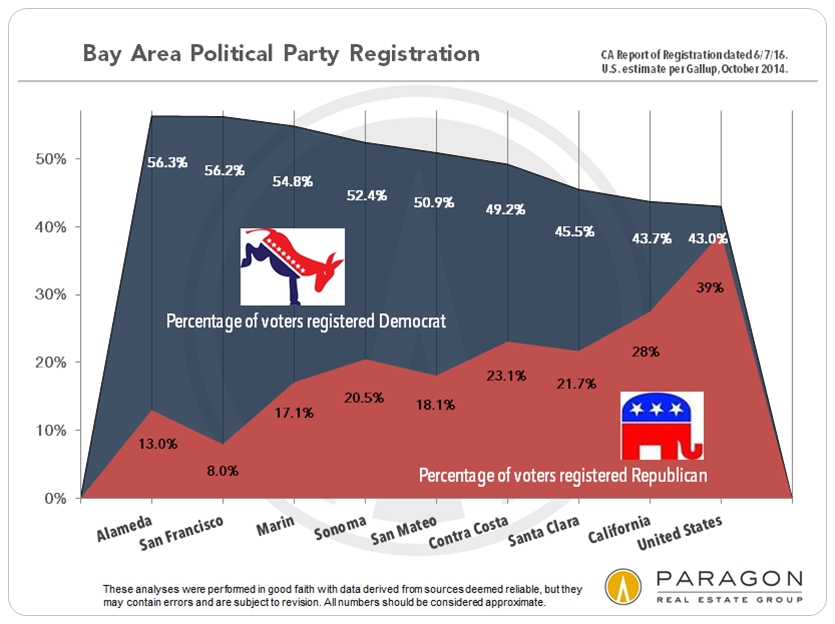 Along with Washington DC and Seattle, the Bay Area ranks among the best educated metro areas in the country. 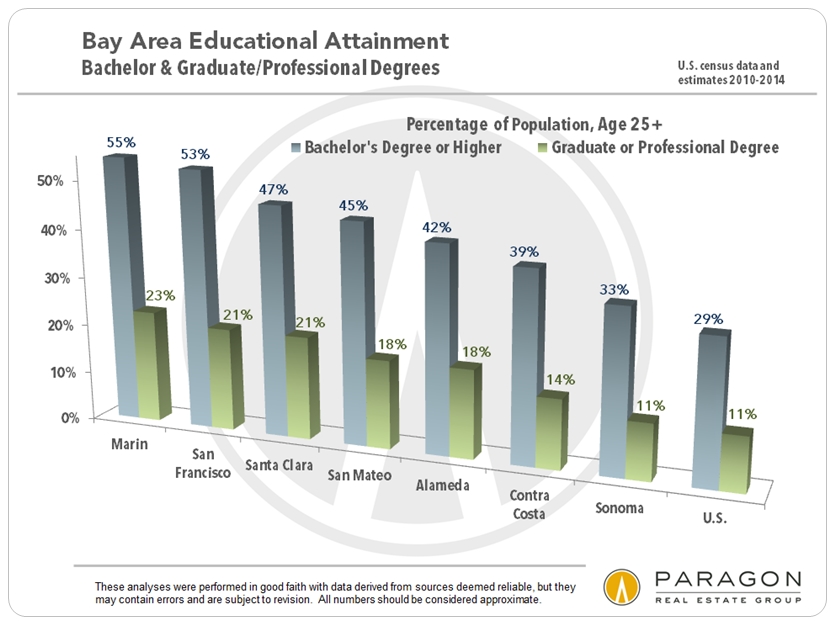 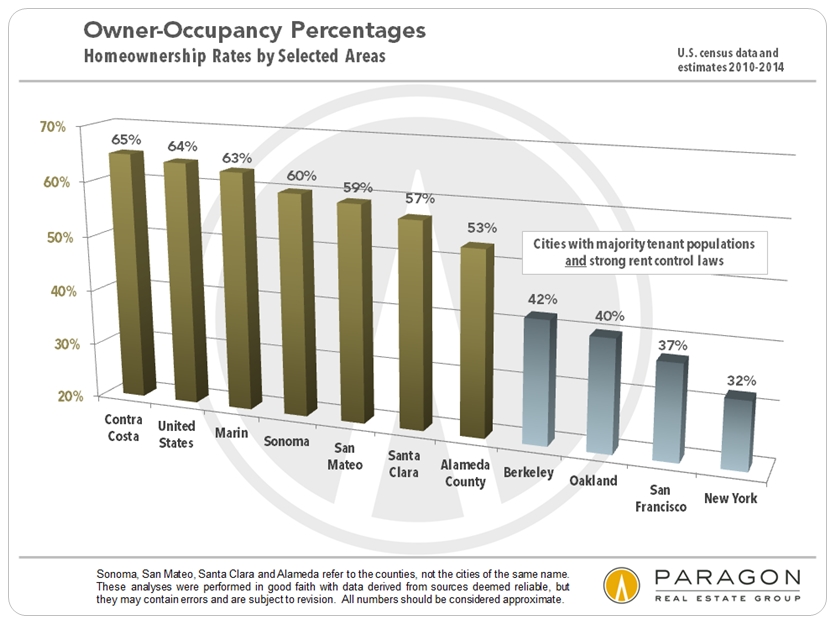 Our most recent region-specific market reports are here:

These analyses were made in good faith with data from sources deemed reliable, but may contain errors and are subject to revision. It is not our intent to convince you of a particular position, but to attempt to provide straightforward data and analysis, so you can make your own informed decisions. Median and average statistics are enormous generalities: There are hundreds of different markets in the Bay Area, each with its own unique dynamics. Median prices can be and often are affected by other factors besides changes in fair market value, and longer term trends are much more meaningful than short-term. It is impossible to know how median prices apply to any particular home without a specific comparative market analysis.