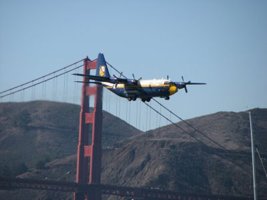 San Francisco Fleet Week celebrates the rich naval tradition in the Bay Area, honors the men and women serving in today’s armed forces and facilitates annual disaster preparedness training with the Navy, Marines and local first responders. A tradition since 1981, Fleet Week is the most anticipated Fall event in San Francisco.

With an estimated audience of 1 million, spectators are drawn every year to the city’s northern waterfront to be awed by a parade of Navy ships, along with a spectacular aerial show that includes the world renowned Navy Blue Angels. With breathtakingly precise maneuvers, the Blue Angels sweep the San Francisco Bay and over the Golden Gate Bridge with their signature blue aircraft and tight formations. Also on hand are a variety of other nighttime entertainment venues that kick off just as the sun sets over San Francisco Bay.

For more information go to www.fleetweek.us/