Virtually every area of San Francisco and the Bay Area has been experiencing dramatic home-value appreciation in the past 12 to 18 months. Some that were hard hit by distressed property sales, which experienced the largest price declines, have surged in price but remain 20% – 30% below previous peak values reached in 2006 – 2008. As a state, California is still about 25% below its 2007 pre-crash median home price. And in San Francisco itself, many if not most neighborhoods now appear to have re-attained or moved slightly beyond previous high points.

But in this past quarter, a handful of neighborhoods and districts in the city have leapt well beyond the highest average home values achieved in the past. Interestingly, comparing these white-hot areas with one another, there are often huge differences in property type, era and style of construction, and neighborhood culture or ambiance. But all of them have been very affected by affluent – often newly affluent – high-tech professionals of one age group and level of affluence or another. Naturally, these neighborhoods are highly desired by other buyers too – often professionals in finance, bio-tech, medicine and law – but the high-tech-buyer dynamic has generally super-charged these markets in particular.

However, please note that the difference we’re talking about between these neighborhoods and the rest of the city is between white hot and red hot: Honestly, they’re all very hot markets right now. 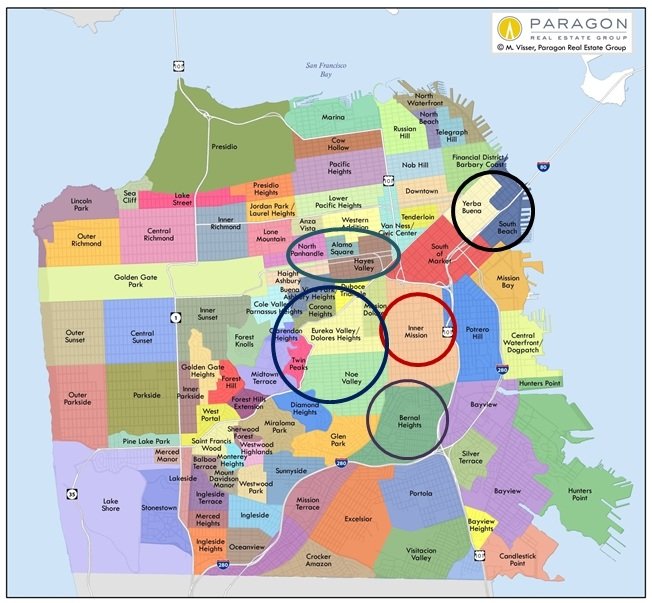 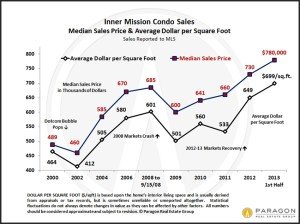 The Inner Mission
Super hot, super hip, generally young: this neighborhood has seen very dramatic changes since the early nineties as a classic process of gentrification occurred — changes which have recently accelerated. Houses here are often large, classic Victorians, while the condos are mostly modern, built within the last decade or so. This area has a large, vibrant and diverse commercial district centered around Mission and Valencia Streets, but is still close to Noe Valley and the Castro. This chart focuses on the condo market, in which values are approximately 15% above the previous peak.

This link goes to the numbers table behind this graph:
Inner Mission Numbers Table 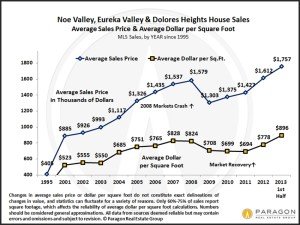 Noe Valley – Eureka Valley (Castro) – Dolores Heights
These neighborhoods are part of a district that includes Cole Valley, Ashbury Heights, Clarendon & Corona Heights, Duboce Triangle, Mission Dolores and Glen Park, all of which have seen enormous recent appreciation. Housing here is typically older, built in the first 4 decades of the last century; there are many parks for kids and pets; the streets are tree-lined and the ambiance of the neighborhoods is relaxed and family friendly. This district surged in popularity and price in the mid-late nineties, was one of the last to peak in value in 2008, and has been at the forefront of the market rebound which started early here, in 2011. Among other advantages, it has relatively easy access to highways south to Silicon Valley. The district also has a large condo market, but this chart focuses on house values.
Numbers Table 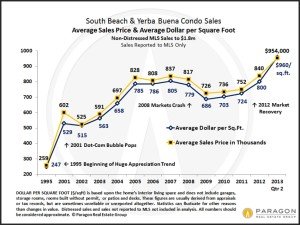 South Beach & Yerba Buena
After the Embarcadero freeway came down in 1991 and then AT&T Park built in 2000, this area changed from a place for B and C-class offices and car stereo installations to the home of some of the most dramatic and expensive condo and loft buildings in the country. More condos are now sold here than anyplace else in the city and high-floor units with staggering views often sell for millions of dollars – one sold for $28 million. It’s popular with a number of demographics – high-tech and bio-tech workers working in offices nearby in SoMa and Mission Bay, financial district professionals, and empty-nesters who want to enjoy city life and have all the amenities, but without the responsibility of maintaining a house. Affluent foreign buyers are also a significant segment. Its neighborhood ambiance is very urban. This chart is for condos below the price of $1,800,000, but the dynamic for ultra-luxury condos is also white hot, with an average dollar per square foot value of over $1200.
Numbers Table 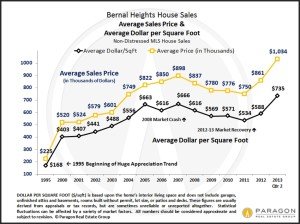 Bernal Heights
Like Noe Valley and Glen Park, this was originally a blue-collar neighborhood filled with Victorian houses. Noe Valley soared in value first, becoming wildly popular, and now people who want a similar family-friendly neighborhood ambiance, but at a more affordable cost, have increasingly turned to Bernal Heights. It also has easy access to highways south to the peninsula.
Numbers Table 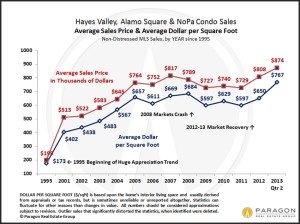 Hayes Valley-North of Panhandle (NoPa)-Alamo Square
This condo market is made up of two totally different types of property: Edwardian flats that have been turned into condos and brand new, ultra-modern condo developments. The Hayes Valley commercial district is very hot and hip, similar to, but still different from the Mission’s Valencia Street. Buyers who are priced out of the nearby Cole Valley-Haight Ashbury condo market often look here for a similar neighborhood ambiance at lower cost. Hayes Valley is also close to the Civic Center cultural cluster of museum, opera, symphony, ballet and other performing arts, which attracts another buyer demographic as well.

If you have questions or would like information regarding a neighborhood not listed above,
please call or email.

Statistics are generalities which usually mask large disparities in the underlying individual sales: they are best used as indicators of longer term trends. Average and median statistics are often affected by factors besides changes in value – buyer profile, inventory available to purchase, significant changes in the distressed or luxury home segments – and how they apply to any specific property is unknown. Only a certain percentage of sales report square footage: average dollar per square foot values and average size are based on those that do. However average sales price is based upon all sales, thus there may be inconsistencies between the three statistics. All data from sources deemed reliable, but may contain errors and is subject to revision. Numbers should be considered approximate.