“Welcome to what is arguably one of the worst cities in America to be a renter, but among the best to be a landlord and apartment investor. San Francisco led the top-50 U.S. metropolitan areas in average rent growth during the second quarter, jumping 7.8% to $2498, while Oakland was No. 2 and San Jose was in fifth place. The rent increases have investors rushing to purchase existing properties.”

The West Bay area of metro San Francisco (SF, Marin and San Mateo counties) continued to boom through 2012 and into 2013, even as it became increasingly expensive. The 136,980-unit market-rate investment grade San Francisco apartment market has rock bottom vacancy and high rents. While the pace of population growth is not high in the densely developed and expensive West Bay, it is still solidly positive at an estimated 9,770 in 2012 and a forecast 11,270 in 2013. Even higher increases are predicted for later years by Moody’s Economy.com. It seems people will pay any price to live in San Francisco, as long as a growing number of advanced, high paying jobs are available.

The Bay Area has a long history of boom and bust dating back to the Gold Rush of 1849 and continuing through the dot-com bubble and bust little more than a decade ago. When the previous tech boom ended, not only did the number of jobs plunge but so did the population. Moody’s Economy.com does not expect a repeat. Instead, employment is forecast to keep growing at a somewhat slower pace, surpassing the 2000 employment peak some time in 2015. Reis predicts a leveling off of the current strong conditions in the apartment market, rather than a frenzy followed by a collapse. The well timed arrival of new supply will keep rent gains in check, while pent up demand will ensure the units are absorbed, barring an unexpected economic shock from outside the Bay Area.

The first three charts below pertain to San Francisco County alone and then only those listings and sales reported to MLS. The specific numbers should be considered approximate, but the trend lines apply to and illustrate the overall Bay Area market: low supply + high demand = higher prices. 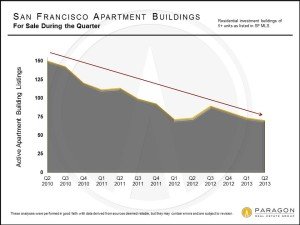 Supply
The supply of investment properties available to purchase as listed by SF MLS has dropped by over 50% over the past 3 years. 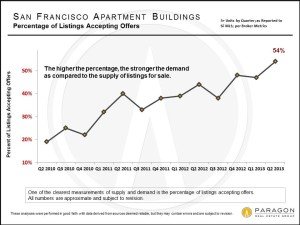 Demand
While supply has plunged, demand has soared as measured by this statistic, percentage of listings accepting offers. 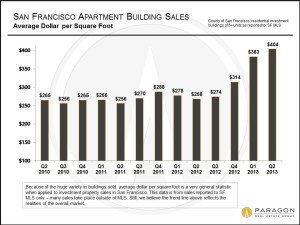 In the analyses below, the San Francisco Metro Area is comprised of San Francisco, San Mateo and Marin counties, while the Oakland-East Bay Metro Area consists of Alameda and Contra Costa counties. When mixing many buildings of very different size, quality and location, all the statistics should be considered very generalized and approximate. The county of San Francisco itself typically has significantly higher rents and values than the other counties. 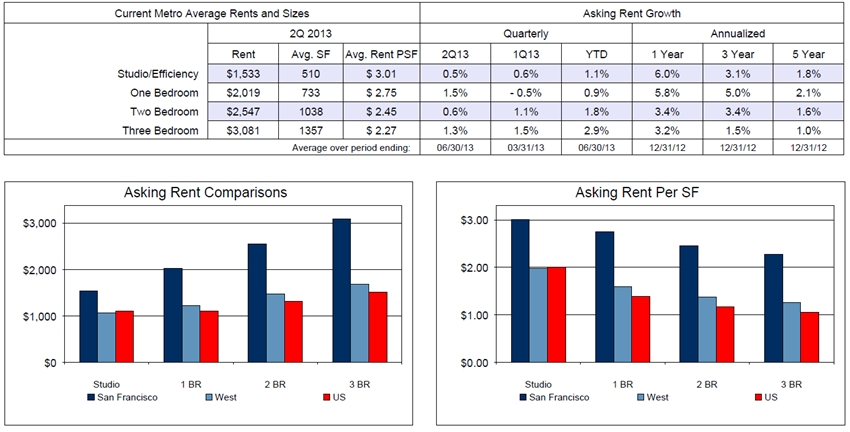 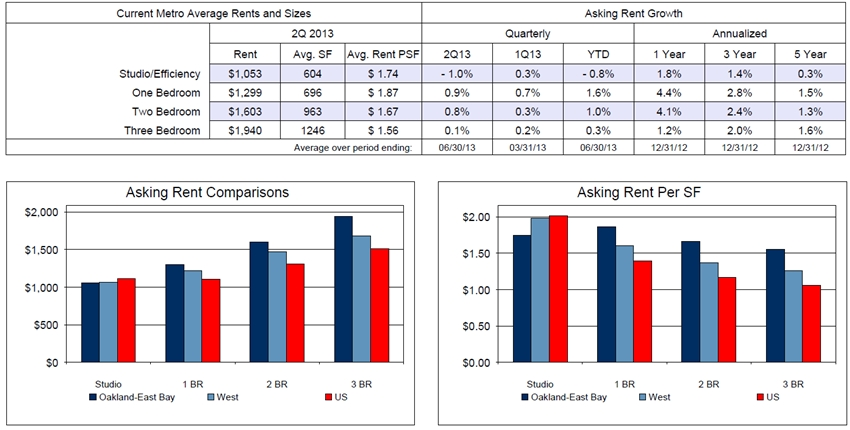 In the West-Bay SF Metro Area, the Civic Center/Downtown submarket led the rest in units sold over the past four quarters at 1,370, and dollar value of sales at $266 million. Among submarkets with substantial sales price per unit, Marina/Pacific Heights leads in price per unit at $478,442. Generally speaking, as the market appreciates, Gross Rent Multiples are heading higher and Cap Rates lower.

For the 3-county, west SF Metro Area, 2,300 apartment units are expected to complete construction in 2013, followed by 3,600 in 2014. The three years to follow are expected to see less new supply, but still more than 1,000 units completed in each year. Whatever number of apartments is built, however, Reis expects net absorption to match it as pent up demand is met. The only question is at what rent level. 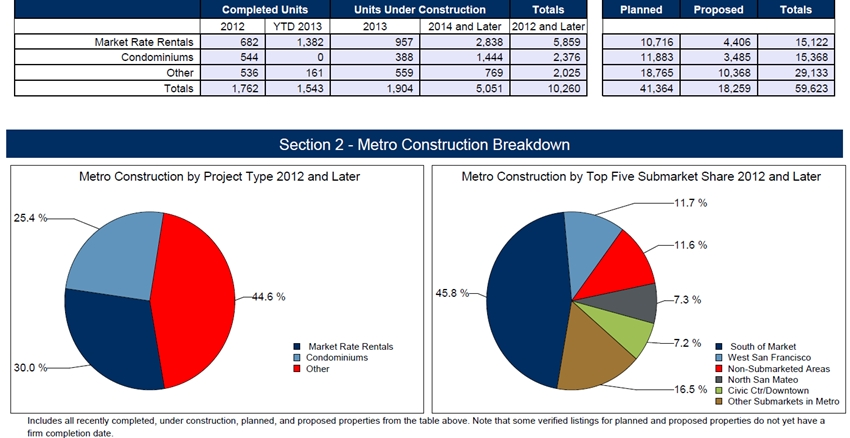 In Alameda and Contra Costa counties, apartment developers are re-starting projects shelved during the recession, and the under construction total has risen to about 1,760 market-rate units. There are also 1,226 subsidized and senior housing units under construction. Relatively few units, however, are expected to complete construction this year, allowing the vacancy rate to fall to a low point of 2.5% at year-end. 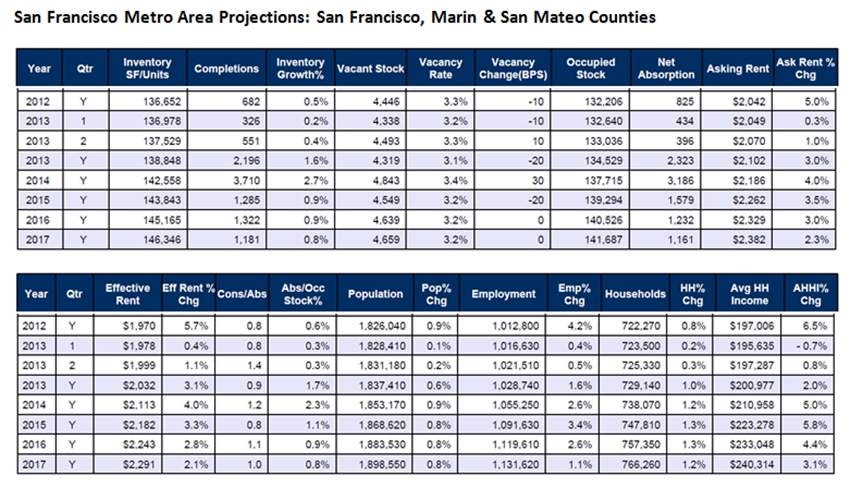 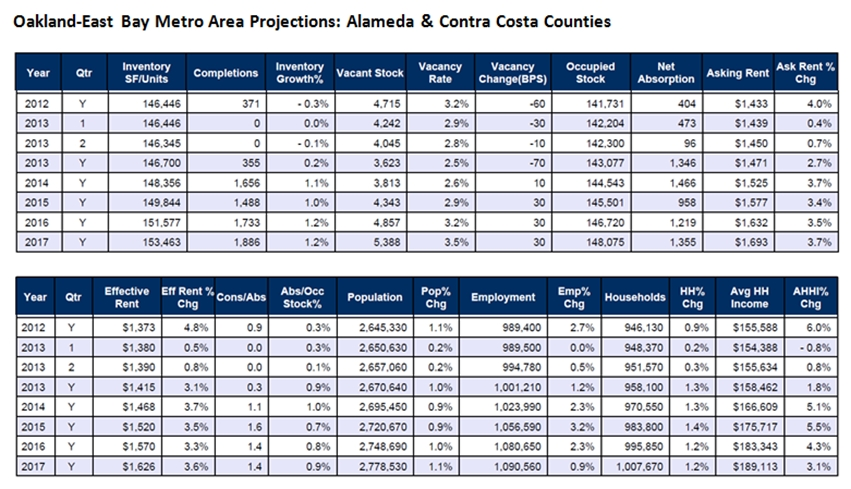 The 15,771-unit Civic Center/Downtown submarket has a first quarter 2013 vacancy rate of 3.5% and an average asking rent of $1,604 per month, the lowest among eleven submarkets according to Reis. The 417-unit second phase of Trinity Plaza was projected to complete construction in summer 2013. The 750-unit Crescent Heights broke ground in January 2013 for completion in April 2014.

In the 9,787-unit Russian Hill/Embarcadero submarket, the vacancy rate is 2.5%, and the average asking rent is $2,767 per month, the highest in the West Bay area according to Reis.

In the 8,084-unit Marina/Pacific Heights submarket, the first quarter vacancy rate is reported by Reis at 2.0%, the lowest in San Francisco proper, with an average asking rent at $2,368 per month. “The Marina, the tract with the highest creative class concentration in San Francisco, has a reputation for being chock-full of young former fraternity members,” according to the Atlantic Cities. “As the San Francisco Chronicle notes, ‘Today the apartment buildings, shops, and restaurants seem to be bursting at their seams with beautiful, young and fit 20- and 30-somethings.”

The 16,018-unit South of Market (SoMa) submarket has a vacancy rate of 5.0%, highest among the submarkets, and an average asking rent of $2,517 per month, the second highest market-wide. In the close vicinity of both the financial district and the high-tech, bio-tech hubs in the city, this is a very strong market. This submarket has dominated new supply recently, but while 1,032 units remain under construction here, new supply is spreading to other areas.

The 8,381-unit North Marin submarket has a vacancy rate of just 1.5%, the lowest among the submarkets, and an average asking rent of $1,608 per month, the second lowest according to Reis.

In the 14,713-unit Central San Mateo submarket, the first quarter vacancy rate is reported by Reis at 2.9%, with the average asking rent given at $2,006 per month, highest in the suburbs.