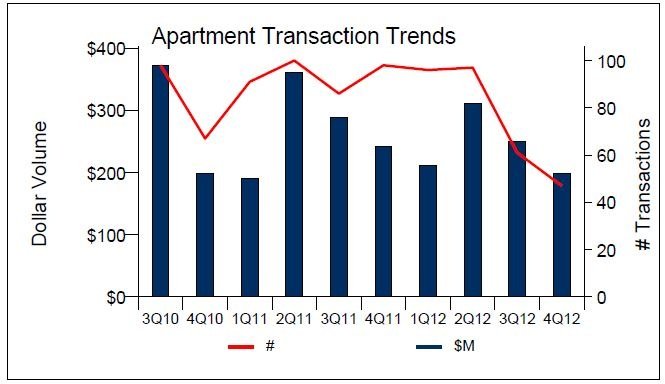 MARKET OVERVIEW: The economy of the West Bay area of metro San Francisco (aka the San Francisco Metropolitan Division) had one of the most dynamic economies in the country in 2012, and is attracting more people from across the globe than its housing market can accommodate. “Having left the heavy-lifting to technology companies until early this year, San Francisco’s non-tech employers are playing a growing role in the city’s labor recovery,” Bloomberg News reported.

The dollar value of qualifying single-property apartment sales in San Francisco in 2012 was $879.2 million in 176 deals according to Reis Transaction Analytics. For the fourth quarter of 2012 Reis reports 57 deals for $253.3 million at a mean price of $230,512 per unit. A shortage of properties for sale is holding back deal volume, as demand is enormous.

“Asking rents continue to soar, despite rent control laws in San Francisco,” according to Western Real Estate Business. While perhaps suppressing overall rents, of course, rent control increases the rent of the market-rate units tracked by Reis by locking up apartments and narrowing the housing stock available to meet new demand. Reis predicts another year of strong rent gains in 2013, followed by moderating but still solid gains thereafter. Reis predicts rent gains will be in the vicinity of 5% in 2013.

SUPPLY AND DEMAND: The broader Bay Area is on the brink of a new supply boom, according to Cassidy Turley. “There were 5,300 new multifamily units delivered in 2012 and we are currently tracking another 19,000 units in the development pipeline. San Francisco and Santa Clara Counties are the epicenter of this growth, though we are also seeing development levels quickly rising in the East Bay.”

Whatever level of new supply is added, and many of the huge-development units referenced above could be 10 years or more away from completion, Reis predicts it will be quickly snapped up. With modest deviations, net absorption is expected to match up with new availability through 2017, keeping the vacancy rate very low.

The 15,692-unit South of Market (SoMa) submarket has a vacancy rate of 4.3%, highest among the submarkets (though hardly high), and an average asking rent of $2,485 per month, the second highest market-wide. Out of 544 condominium units completed in the West Bay market in 2012, 473 were in SoMa.

For the 10,639-unit South San Mateo submarket, Reis reports a vacancy rate of 1.9%, second lowest among the submarkets, and an average asking rent of $1,740 per month. This submarket is near booming Silicon Valley.

POLITICAL: “San Francisco could soon be home to some of the tiniest apartments in the country: studios for up to two people that include a bathroom, kitchen, and a living area measuring 10 feet by 15 feet,” according to the Associated Press. “The Board of Supervisors approved legislation allowing construction of up to 375 micro units measuring a minimum of 220-square feet.

“Back from the graveyard of dead 2010 ballot proposals is a plan that would compel owners of ‘soft-story’ buildings to retrofit them for earthquake safety by 2020,” Curbed SF reported. “San Francisco’s Board of Supes will revisit the issue, which would apparently apply only to wood-frame buildings built before 1978, with at least three stories.