The number of home listings accepting offers was way down in October (when it usually goes up); months-supply-of-inventory was significantly up (when it usually goes down in October); average days on market were still very low; median sales price was generally stable: The San Francisco real estate market is currently delivering a wide variety of signals, some of them undoubtedly influenced by the U.S. government shutdown fiasco, which dominated the first 3 weeks of last month. 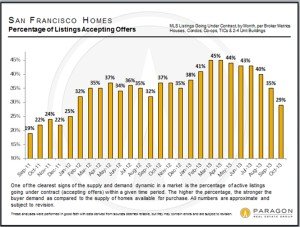 Percentage of Listings Accepting Offers
October is usually one of the busiest months of the year for buyers purchasing new homes – as measured by having their offers accepted – as they react to the surge of new listings that typically arrives after Labor Day. But the government shutdown and the threat of U.S. default hammered October’s activity as SF buyers nervously waited to see how it was going to shake out. Surveys show that the affluent were the group most concerned about a possible default – and SF is a very affluent home-buying market. In this chart, the plunge in the percentage of listings accepting offers is well illustrated; and on a unit basis, the number of homes accepting offers dropped by about 20% year over year, a big decline. Closed sales were actually up about 7%, but October closings reflect accepted offer activity in August/ September before the shutdown crisis began. It is too early to tell if there is more going on in the market besides the temporary reaction to default fears. 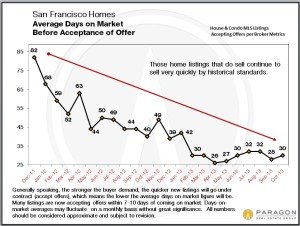 Average Days on Market
Although many fewer listings went into contract (i.e. accepted offers) in October compared to last year, those homes that did accept offers did so, on average, very quickly. That, of course, is usually an indication of a hot market. So buyers didn’t snap up as many listings – either as a percentage of listings or in units – but the ones they did, were snapped up very quickly. Sometimes different statistics appear to indicate different trends on a short-term basis; such anomalies are almost always resolved over a longer term. 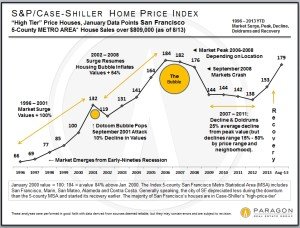 Case-Shiller Home Price Index
The last Case-Shiller Index reading – for the 5-county “SF Metro Area” – came out in late October for the month of August, and it’s a 3-month moving average, so the Index really reflects the market 3 to 5 months ago. This chart gives an overview of long-term trends in Bay Area values for homes in the upper third of sales by price range (i.e. more expensive homes). If we looked at what was happening month by month in the Index, we’d see a gradual plateauing of price appreciation of higher-priced homes over the past few months after the furious increases of spring. Home values in the city of San Francisco itself (as opposed to the Metro Area) are now generally above the previous peak values in 2006-2008.
Paragon Case-Shiller Report 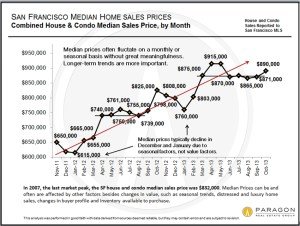 Median Sales Price Appreciation
This chart tracks SF home median price appreciation since the market recovery began in earnest. The overall trend has been dramatically up, but median prices for the last 5 months have been relatively flat after the springtime spike. If the October slowdown in accepted offers had any effect on median prices, it won’t show up until November and December closed sales are tallied. The market has certainly shifted from the frenzy of the first half of the year, but, except for October (affected by default fears), statistical measures of supply and demand have generally continued to show a strong market by historical measures. If a significant shift is occurring in the market, it will become clearer in the statistics of upcoming months. Note that median price changes are not perfectly correlated to changes in home value, as they can be affected by issues such as seasonality and inventory. 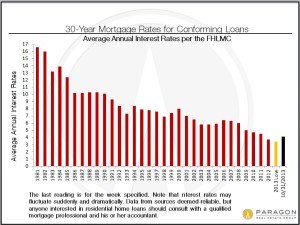 Mortgage Interest Rates
In good news for buyers and sellers, 30-year interest rates have been dropping and are now at their lowest since June (though still above the historic low reached earlier in the year). 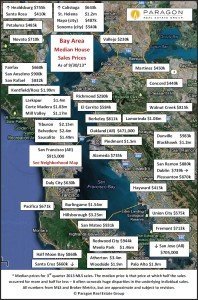 Home Values around the Bay Area
We just updated our Bay Area Home Value map, which provides an interesting look at comparative home prices around the bay. Remember that each median price delineated for a particular city disguises a huge variety of prices in the underlying sales. For example, in San Francisco, median house sales prices by neighborhood vary from under $500,000 to over $4,000,000. Other towns and cities will have a similarly wide range in property values underlying their overall median sales prices.
San Francisco Neighborhood Values